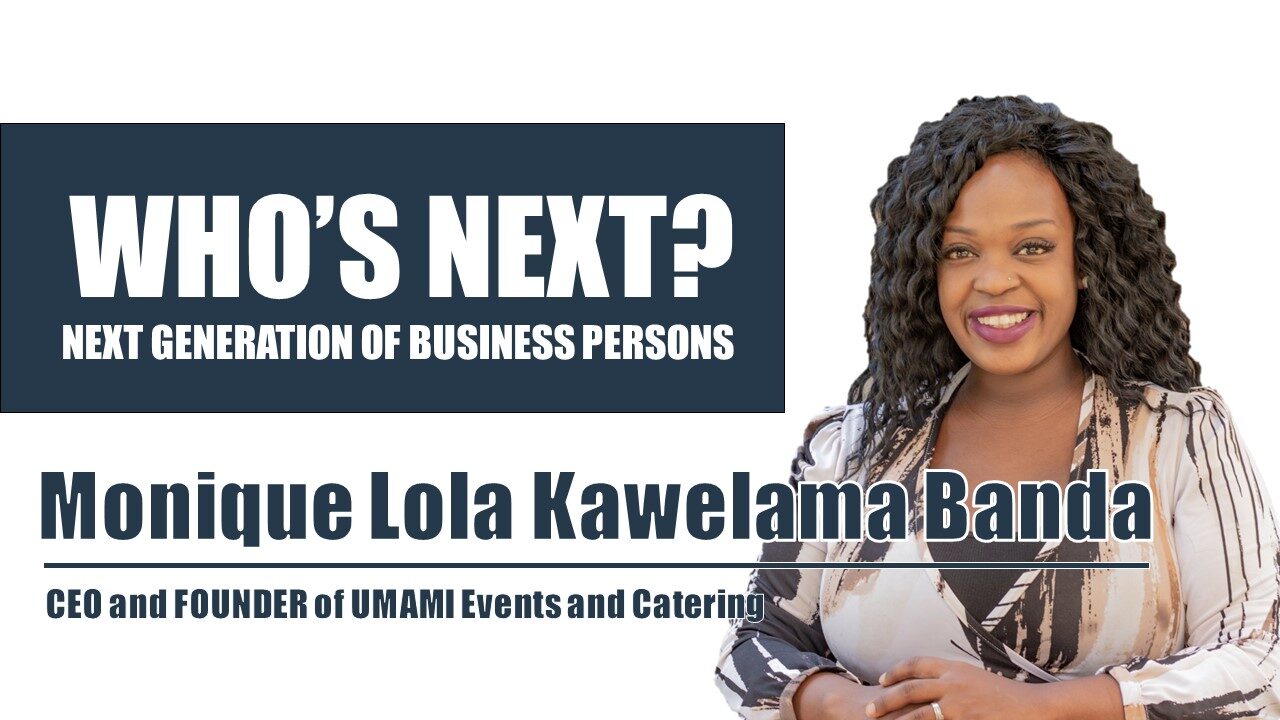 “YOU NEED TO BE INNOVATIVE, CREATIVE AND YOU NEED TO HAVE ENDURANCE.”

MALAWI PLUS
Give us a brief background. Who is Monique?

Monique is a young Malawian woman.

I spent 12 years of my life in South Africa.

I did my secondary school there and then I went to Rhodes University where I got a degree in International Relations and then I came back to Malawi.

I learnt a lot about different lifestyles while I was away and when I came back I wanted to expand the way Malawians socialize.

MALAWI PLUS
When did you found UMAMI Events and Catering?

UMAMI Events and Catering was founded 2015.

It priginally started out as me wanting to do catering because I used to cook and I did chilli’s from my house.

I chose the name because it’s the Japanese word for ‘deliciousness’ and I’ve always been fascinated with it. I would hear the word a lot because I used to watch a lot of cooking shows and it’s a word that always stuck with me but UMAMI as an entertainment company actually started out because I did a food fair and I thought calling it UMAMI Land would be a good idea.

So it branched off from there.

MALAWI PLUS
Tell us more about UMAMI Events and Catering. What is it and how many projects are you involved in?

I had an entertainment company that was called Lola-inc and I used to do crew wars and I was also doing comedy nights under that name.

My initial plan was to run 2 separate entities and Lola-inc was going to do entertainment while Umami was just going to be focused on food.

After the success of the first UMAMI Land, there just wasn’t any space for those two to be separate.

People just mashed them together and we went from there.

There are so many projects that I’m currently involved in.

I have UMAMI Land which is the food fair and that’s ongoing.

I’m also going to reboot my gameshow with friends which will be called Crew Wars.

This will be in December during the rainy season.

There’s bwelani tidye which is going to be the Malawian version of a hosting and cooking show and will be televised on Mibawa television.

We will do the second round of spelling bees in both Blantyre and Lilongwe.

MALAWI PLUS
What inspired you to found UMAMI Events and Catering?

There was no accessibility for people who didn’t have resources and funds to showcase their talent.

When I started, I was the only one doing these types of events at the time and that’s what I wanted to create.

A space where people can come together and sell anything.

MALAWI PLUS
When did you start cooking and who taught you?

I don’t remember a time when I wasn’t cooking.

Growing up for me, there were always a lot of people around the house so my mother cooked a lot all the time and she would cook everything.

My parents also travelled a lot so there was a lot of sea food and various kinds of foreign dishes.

So from there I became interested in how food brought people together.

In terms of who taught me, I always say the world taught me.

The places that I travelled to inspired me and also being outside the country for such a long time also influenced my cooking.

I never had formal training but within my household everyone cooks so I also learnt from my family.

And some if it was self-taught because it drove me to want to learn more.

MALAWI PLUS
What has been the most challenging part about running this business?

One of the most challenging things has been getting people to see my vision the way I see it.

My projects are always self-sponsored so getting other people to believe in my dream has the been most challenging part.

Infiltrating the status quo has also been difficult.

Because my brand is so multi-faceted and we do so many different things, the COVID-19 pandemic did affect some of my events especially the bigger ones.

I couldn’t do my food fairs for a long time and I couldn’t do events that exceeded a certain amount of people.

But I also do cooking lessons in people’s homes and I also do seminars where I teach people how to cook, how to make cocktails and these are always limited to 20 people so these were not affected.

As for my catering, I was already delivering in people’s homes so in a way I had already adapted to what the pandemic demanded.

It was also difficult to remove the stigma around attending events after the situation stabilized.

MALAWI PLUS
What has been your proudest achievement since founding UMAMI?

The first time I had over 1000 people at an event was a very proud moment for me.

It was the first time I saw something I had visualized actually come to fruition.

It gave me the boost to believe that my dream is valid and that it was not a waste of time. Seeing the works of your hands manifest is very fulfilling.

I never even had many followers on social media, I simply had the will of fire and that is what drove me.

MALAWI PLUS
What would you say are top 3 skills that one needs to be a successful entrepreneur in Malawi?

You need to be innovative, creative and you need to have endurance.

You need to be creative because people get easily bored in small communities and Malawi is a small country.

So if you keep doing the same thing, people will eventually get bored.

You have to be innovative because curveballs will be thrown your way all the time.

So you need to constantly come up with new and creative ways to keep people engaged.

You have to have endurance because you will not always get the same output as you do input.

You have to be able to take a fail.

If you cannot take a loss, you will never be able to win so that’s where endurance comes in.

MALAWI PLUS
What is your favourite part about being an entrepreneur?

My favourite part is being able to be the master of my own destiny.

Being an entrepreneur gives you power and it gives you a certain discipline.

Being an entrepreneur means that you are committed to something and seeing that materialize into something tangible is my favourite part.

Having goals and accomplishing them brings me so much joy.

MALAWI PLUS
What is your signature dish?

I can pretty much cook anything but I would say anything to do with sea food is my signature dish.

MALAWI PLUS
What advice do you have for young entrepreneurs that want to get into the catering business?

I know how cliché that sounds but it’s the truth.

When I used to hear this, I didn’t like it because it was very vague.

But I’ve come to realize how true it is because of how it encompasses many aspects.

You are going to face many challenges but you need to understand that just because things are not working out the way you want them to, does not mean that you do not have talent.

It does not mean that this is not meant for you.

When I started wanting to do this, I had a lot of people doubting me because I believed in myself.

You also need to open your own doors.

We sometimes get set back because we’re waiting for someone to take us under their wing, and to tell us the answers.

The truth is the only answer is to open your own doors and start where you are and use what you have.

Your will to succeed must be stronger than whatever talent you possess because people who become successful aren’t always the most talented but the most driven.

Because a talented person can give up after one try because they believe they are entitled to it because they are good but just because you’re good doesn’t mean you deserve anything so work and work and eventually, something is going to come out of it.

Investing in Real Estate in Malawi